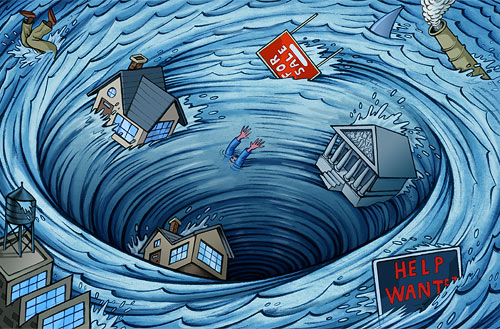 I recently met a friend for coffee to catch up on things. He was going through a lot; he was recently divorced (everything was settled, but he, his ex-wife, and his kids were still in that transition period), he had started a new job, and was trying to focus on being a good dad to his kids and a good employee in his new role while all the while trying to manage his relationship with his ex-wife and learn his new role as a single dad. It was everything he could do to keep up with the pace, the responsibilities and the expectations, and he felt like he was simply bouncing from task to task with no real process behind it, and fighting just to keep up. He was in what he called The Reactionary Swirl.

This is a more familiar place for many of us than we would like to admit. We wake up the morning ready to face the day. . . . but not really sure what that day holds. While we may be getting things done, it is more about surviving the next task that comes our way and getting through the day than it is about calmly and clearly executing a plan. We reactively deal with what comes next, rather than proactively making the next thing happen. It is far too easy to get caught up in The Swirl, and it demonstrates a need for a plan.

Avoiding The Swirl, being purposeful and intentional is about much more than making lists or planning your day in advance (although that is certainly part of it); it starts much higher than that, with establishing clear, well thought-out goals. You need to have a clear vision for what you want to do, and an understanding of what you are ultimately trying to accomplish through your goals. Knowing your goals, knowing the end-game, leads to those smaller sub-goals that serve as benchmarks to measure progress. These goals and sub-goals allow you to determine those tasks and activities that keep you on the path to goal achievement, which leads to building a schedule that helps focus you on those important tasks, and ultimately, to those lists of actions that need to happen, ranked in order of importance.

Is it easy? Of course not. These steps can take weeks to identify and an incredible amount of discipline to master and turn into habit. Throw in the inevitable fire drills that will arise and will pull your attention and focus away, and the process can seem daunting at best. But it works, and it will make a difference. Commit to the process, and try your best to stay the course. If you veer off, course-correct and get back on track.

We avoid The Swirl by planning. Establish your plan, put in the time it takes to commit the process to muscle memory and form a (good) habit. You’ll find yourself moving toward a clear destination, rather than just swirling through the day.