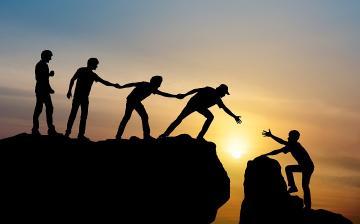 So much of success (business and personal) is based on connection. Our ability to form bonds and build relationships with others is often the difference between a successful deal and a failure. To be clear, knowledge and skills matter. Products and services, and having the right solution at the right time, matter. But in a time when the differentiation between product and service offerings is razor thin, and more and of what we buy and sell is being commoditized, getting a deal done, or at least getting that first meeting, often comes down to a connection. It’s not what you know; it’s WHO you know.

My wife Carol works for a footwear brand. She told me a story about how a new brand partnership was formed. Her company identified a company which which they were interested in creating a uniform/licensing deal, and in working to determine how to get the partnership started they found a connection; Ryan, their company’s Founder, had a son at the same school as the son of the executive assistant of the Founder of the company in question. It was a few degrees of separation, but it was a start.

Not long after that, Ryan was in the pickup line at school and saw the executive assistant parked just a few cars away. While the original plan was to send an email introducing himself, Ryan scrapped that plan, summoned his courage, walked up and knocked on the window. The two had a brief chat and Ryan explained who he was and the idea he had. It turns out that the man’s boss was hosting a party over the weekend at his beach house and there were a few extra spots available. The executive assistant invited Ryan to the party on the spot (Ryan accepted, of course). The weekend happened, the party was fantastic, Ryan wowed the Founder with the brand and the idea. . . . and by the end of the weekend, the framework of a partnership was created between the two companies.

Relationships matter. People and connection matter. A willingness to make yourself vulnerable and ask someone for help matters. This deal did not happen because of a dynamic presentation, or because of the company’s fantastic value proposition, but because a conversation at the kids’ school led to dinner and drinks. It happened because Ryan knocked on the window. Of course, they needed to be able to back it up. The shoes are fantastic, and the values and visions of the two companies match up well. But the initial conversation that led to the business side of things started because there was a point of mutual connection between two people. It happened because one person was willing to ask another person for help.

In thinking about the next deal you want to make or the next sale you want to close, pay attention not just to how you can solve an issue for a person or a company, but who you know that can help introduce that solution. People want to help. People like being useful. People want to see you succeed. Use your relationships to develop more relationships. Reach out to those you know, ask for their support and ideas, and build a new connection.